MARIE - The Song, The Video, The Story

A cascading series of events came together to irrevocably link me with renowned 19th Century Newfoundland-born opera star Georgina Stirling (1867-1935), who performed under the stage name Marie Toulinguet, and had great international success. Our cosmic union has resulted in this gorgeous and undeniably haunting pop/classical crossover new single, "Marie," now available for digital download.

Written by late Newfoundland folk hero Ron Hynes about Stirling, "Marie" was serendipitously discovered as I was preparing to tour Stirling's song book across Newfoundland in 2017, an idea that came from a soul-searching conversation with a cousin who encouraged me to explore my ancestral Newfoundland roots. I met Newfoundland Singer/Songwriter Chris LeDrew who happened to be long-time friend/colleagues with Ron Hynes and had toured with him. While organizing the first concert for St. John's, Chris asked me if I had heard of the song "Marie", a tribute to the life and legacy of Georgina Stirling from Hynes' final album before he passed away with Cancer, 2016's Later That Same Life, and representing a clear line-through between Newfoundland's musical past and present. I knew I had to include this jewel in my concert program of repertoire outlining the life and career of 'Marie'. I quickly got in touch with Ron Hynes' manager, Charles MacPhail, and he happily sent me the lyrics and mp3. Charles told me that before Ron died he said, "Keep my music alive, brother." As Ron underwent numerous rounds of chemotherapy before recording his final album the words were quite challenging to understand but, bless his heart, he went ahead with finishing his final gift to the world or this unique presentation would not have been in existence. Though from opposite spectrums of musical genres, in the end, whether it's opera or pop or a combination of both, we must do what speaks to us and feeds our souls. This is what I hope to do with music.

It was an incredible honor and privilege to have performed this hauntingly beautiful song "MARIE" in concerts with Newfoundland pianist Evan Smith, and an even bigger honour to have collaborated on recording it together. Later in 2017 I traveled back to Newfoundland to perform two more concerts this time in Twillingate, Georgina's hometown. Performing in the very church where Georgina first started her career and from which she was laid to rest was simply entrancing. I met up with drone videographer, Julian Earle of Twillingate, to film this captivating video footage while visiting the late diva's grave-site and other landmarks. Somewhere in the heavens or across the ocean waves of Newfoundland, my wish is that Georgina Stirling and Ron Hynes are smiling and sagely nodding their heads.

The song "MARIE" is part of a full-length tribute album of sacred solos and songs based on Stirling that is currently in progress to be released 2018/2019. I am co-authoring a new book about Stirling with my grandfather, veteran Newfoundland author Calvin Evans who in 1993 gave me the book Nightingale of the North by Amy Louise Peyton. We will be expanding on the life, career, and performance aspects of Georgina Stirling and sharing more staggering synchronicities along the journey of bringing Georgina Stirling into the 21st Century.

- WHAT PEOPLE ARE SAYING ABOUT MARIE -

"The first time hearing Tonia's rendition of MARIE I was flooded with emotion, the goosebumps lead the way to tears and the memories of Ron writing this hauntingly beautiful piece. I am sure Mr. Hynes would be smiling to hear your lovely voice deliver his lyrics and music in such an exquisite way."

“After viewing Tonia’s version of “Marie”, I was transported back home to my loving province of Newfoundland and Labrador and all the wonders it has to offer. As an international opera singer from the province and listening to stories as a child from my grandfather (Ignatius Rumboldt) about Madame Stirling, I was delighted to learn that Tonia had done something special in the renowned soprano’s honour. When Tonia combines her beautiful voice and spirit with the legend of Ron Hynes’ music it becomes transcendent. I hope this song and version reaches many hearts from Newfoundland and beyond as it did mine.”

​"Tonia Cianciulli's beautiful rendition of Ron Hynes' "Marie" brings to life the longing and emotional power of this story as told through Hynes' poignant lyrics. Cianciulli's operatic mastery adds a majesty to Hynes' finely crafted song and brings us that much closer to feeling what Marie would have experienced in her own life as a world-renowned opera singer."

​- LYRICS - Twillingate's a million miles away The orchestra's in tune, n waits to play. Send a horse drawn carriage straightaway For Marie Toulinguet.

I don't feel like I belong. Some days I'm not that strong. Everything’s too fast for a young girl, Far from home So far from home.

And the name upon the marquee isn't mine It's a stage name, to complete a grand design. But it swells the small town singer to sublime Like warm Italian sunshine

I am just Georgina back at home. Not so special, not famous not well know. Just a Stirling girl from Twillingate That a tiny twist of fate smiled upon Fate smiled upon...

'All things work together...'

Self-Care for the Artistic Soul 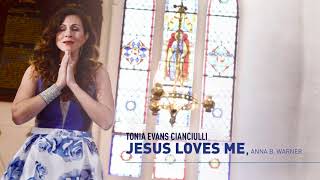 'Jesus Loves Me', and you too! SONG RELEASE

Break away from the 'cloud'!

The Nightingale Sings Sweetest in the Darkest Hour 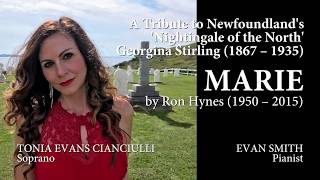 MARIE - The Song, The Video, The Story

Keep On Keeping On 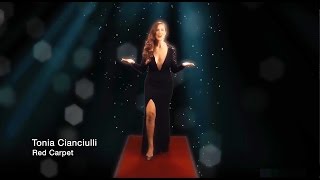 Never Underestimate the Magical Impact You Can Have On Another